It's A Dogs Life

Rufus' Diary Well I don't know what's going on, this is the third week that Polly has been at home all day long. She's been cleaning windows, emptying the shed of lots of rubbish, gardening,  and making lots of quilts. Usually at this time of year, and especially as the weather is so glorious, she is out and about with her friend M. Read more

Buster's Diary Well I've had my leg x-ray'd and the the good news is that there is no arthritis, no fracture and nothing sinister, but the bad news is I still limp now and again and the lump is still there. I'm taking medicine and have to go back in 4 weeks time. Polly was never convinced it was a shoulder injury, she thinks it's a hematoma. Read more

Rufus' Diary Polly, Buster and I don't like this weather, even when it's not raining it's still wet, and when we run across the fields we get mucky which means ..........we get hosed down when we get home. Legs and feet aren't too bad, but the under carriage, oh dear, the indignity, it's not nice, although Polly is very careful! Read more

Buster's Diary  Polly didn't enjoy this morning's walk, she was ill prepared for the chilly wind, she felt cold. She was also tired from a long and busy day yesterday. September already! Hope you've had a good summer. We have enjoyed it, one or two days got a bit hot, Polly just stayed indoors trying to keep cool, and so did Rufy and me, otherwise we enjoyed laying on the cool grass - Rufy and me, not Polly! Read more

Rufus' Diary
It's ages since one of us posted - 5 months to be exact. So what have we been up to? well, not very much really, our lives are quite simple, walks, sleep, food and play.
Read more

Buster's Diary
Not much has been happening here, we had a quiet Christmas. A few social events and catching up with family. On Christmas day Polly and her daughter took me and Rufus out for a walk wearing these. Read more

Rufus' Diary
Phew, are we all enjoying this amazing weather? Polly is mostly happy with it because she knows for a fact that come winter she will be hating the cold and damp!
Read more

Buster's Diary Hooray it's Spring again! We had a couple of weeks of glorious weather,  SL was wearing short sleeved t-shirts, then it turned chilly and she was back in long sleeves and a gilet - I bet you're impressed that I know that word! and now it's glorious sunshine again. Read more

Rufus' Diary Great walks these last couple of mornings, pretty snow. Buster and I love snow, in fact Buster got quite animated today, usually it's me that wants to run around and play and Buster is like "Stop bugging me, I just want to sniff everything" but today he was running around wanting me to chase him.  Read more

"It's A Dog's Life"
What does it mean?
Well it has two meanings
It can mean a miserable unhappy existence or, as in the case of our dogs, a wonderful life. Take a look at what life is like for Buster and Rufus. Read more 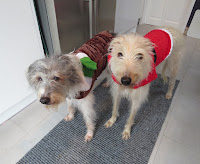 The Dogs' Diary
Santa and a Christmas Pud
Oh dear, we don't know what to say.
A few days ago Polly's daughter went shopping and came back with these
Read more

Buster's Post It's a while since we dogs did a post, not a lot has been happening, our lives are pretty much the same day after day - morning walk, sleep, food, bit of play, more sleep, a brush every couple of days and nail clipping now and again, calm routine until ........... cats, not one but two, moved in next door. Read More 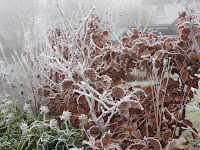 Rufus' Diary
Well there's not much happening here at Chez Olive & Pru. In between hibernating, reading and working on her dolls house Scary Lady hasn't been doing much, she really doesn't like this time of year.
Read more 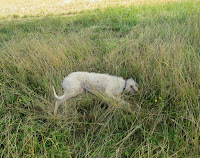 Buster's Diary
Our walks are slightly better now that the weather is a little cooler, SL is still wearing shorts though, well knee length ones, she doesn't want to scare the horses! Despite going out earlier it was getting uncomfortably hot by the time we were on our way back.
Read more


Buster's Diary - Rufus Can Swim!
He didn't know he could until he went into a pond that was deeper than he thought! we're used to paddling around in shallow streams. We have been doing a longer route for our morning walks, SL thinks it will help her shed the few extra pounds that she has put on over winter. What is it with humans and their weight?! The route takes us along the side of a stream that opens out into a small pond. Read more 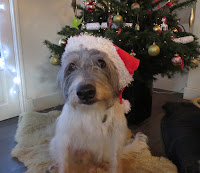 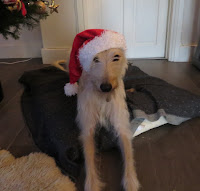 Merry Christmas from Buster, Rufus and Moi
I can't believe it, Christmas Eve and I've mowed the lawn! it's been bugging me for a while. I didn't spend too much time on it and I didn't trim the edges but it looks much better. Read more 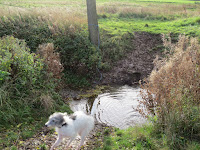 Buster's Diary
Rufus has hurt his paw again, it's very red and sore and he's hopping around on three legs, so no walks for him for a day or two. Our walks are very wet and muddy at the moment, two songs go through SL's mind when we're out - Mud Glorious Mud and Slip Sliding Away. Part of our walk takes us across or beside this small stream, depending on the water level. Read more 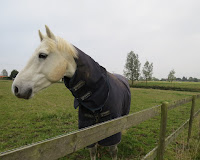 Rufus' Diary
The weather is starting to get chilly in the mornings and SL is wearing her winter coat. Some mornings she wears her gloves and hat, but she usually takes these off after about 20 minutes. The horses are wearing their coats too.
Read more

Buster's Diary
One of our walks involves crossing this bridge, over a stile and into a field that leads into other fields. It's a nice walk and used to be a regular one until the bridge broke. We continued to use it occasionally until the day I refused to cross it on the way back from our walk, it was starting to get a bit wobbly.
Read more 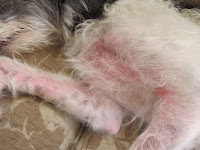 It's been bit of an eventful week here at chez O&P. Poor little Buster, those horrible harvest mites are giving him a hard time. The Frontline spray that SL used on his legs was effective but she didn't think about spraying his chest.
Read more 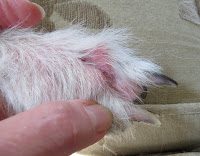 Buster's Diary - Harvest Mites
I'm suffering from harvest mites again. Last year my legs were so red they looked as if they had been burned. It isn't quite so bad this time because Scary Lady started treating them sooner.
Read more 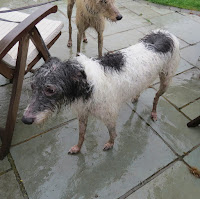 The Dog's Diary - Today's Walk
Oh dear, look at us, soaked to the skin. Scary Lady got it so wrong today. Even she got wet as she only had her flimsy shower coat on.

Rufus' Diary - Stinky and The Chicken Slayer
Stinky, how outrageous, calling me such a name, me whose name has been used in the same sentence as elegant aristocrat.
Buster's Diary
The chicken slayer. I just chased it and caught it, it's what us dogs do. Read more

Buster's Diary - How Scary Lady got her name
Monday's walk: Got soaked. The weather was good when we went out but the storm clouds soon appeared. It was all right for scary lady (that's her who does this blog thing - will explain later) she had her coat on.
Read more 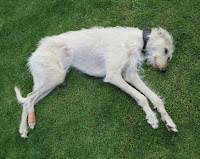 Rufus' Diary
Tuesday: Tearing across the fields like we do, winding Buster up to chase me knowing that he can never catch me because I can turn on a sixpence, then ouch that was painful, caught my foot on something, need to slow down a bit. Back home and it's bleeding profusely and I have to hold the leg off the ground. Read more 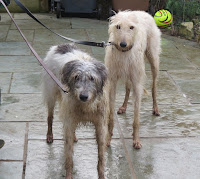 That Pesky Cat
Now and again when Rufus is in the front lounge he does an eerie bark, a sort of cross between a bark and a howl, I know its Rufus and I know why.
Read more

A Muddy Walk
I don’t like cold weather, but one advantage of frosty mornings is the mud takes longer to soften, so the dogs don’t get too dirty. However a couple of days ago we met some friends who have a beautiful white Husky cross, and while we were talking the dogs were playing.
Read More


Grumpy Old Man
Buster is four now and in danger of turning into a grumpy old man! Bless him, he does have his moments though.

Rufus was a rescue dog and is about two years old. He is a real character, crazy and funny.
Read more

Buster was such a cute puppy but he was a little devil in the garden.
Read more

Rufus (left) and Buster are Lurchers, Rufus has more greyhound in him, Buster has more terrier.
Read more