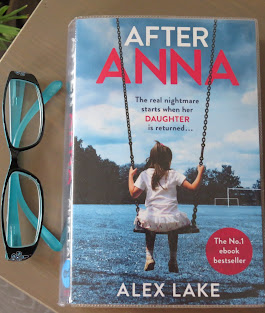 After Anna by Alex Lake

Five year old Anna disappears from outside her school, she has vanished, no one saw anything, the police are at a loss, her parents are beyond grief - their daughter is lost, perhaps dead, perhaps enslaved. One week after she was abducted, Anna returns home. She has no memory of where she has been,  and this, for her mother, is just the beginning of the nightmare.

The kidnapping takes up quite a bit of the beginning of the story. It’s written in the third person and we learn that Anna is going to be returned home unharmed. But why take her in the first place?

On the day of Anna’s disappearance her mother Julia was running late at work, her phone had no charge. But why did  the teachers at the fee paying school just let her wander off without checking that her mother was there to collect her?Julia is roasted by the press for being a bad mother. At the beginning of the story she seemed cold, referring to the breakdown of her marriage in an almost “oh well that’s that” matter of fact way. But as the story progressed we saw a warm person and a strong, loving mother.

In theory a missing child should unite parents but Julia’s weak husband offers no support and his domineering mother, Edna, never misses an opportunity to interfere and undermine Julia.

As Anna started to remember small details I picked up on one of them and started to figure it out.

It is an excellent chilling psychological thriller, well written with well crafted complex characters, a unique plot and plenty of suspense. My only criticism is I thought a small part of the ending was ridiculous.