As well as being great houses, castles were also centres and symbols of power. Great medieval lords used their castles to intimidate rivals and even, on occasion, to challenge the monarch. 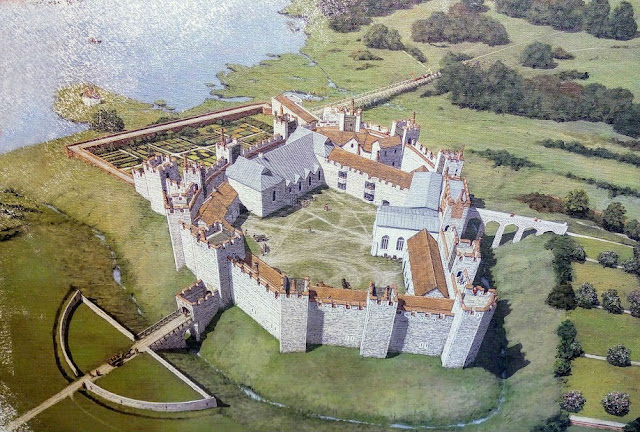 Framlingham was a magnificent late 12th century castle. With towering walls it was a fearsome fortress. It has passed through many hands and seen numerous architectural modifications during its long history.
In 1101 Roger Bigod, Earl of Norfolk was granted the Manor of Framlingham by Henry I, with the right to build a castle. The first fortifications (probably wooden) were built on the site. The Bigods were a powerful and ruthless family. The first stone buildings at the site were probably the work of Hugh Bigod, 1st Earl of Norfolk. 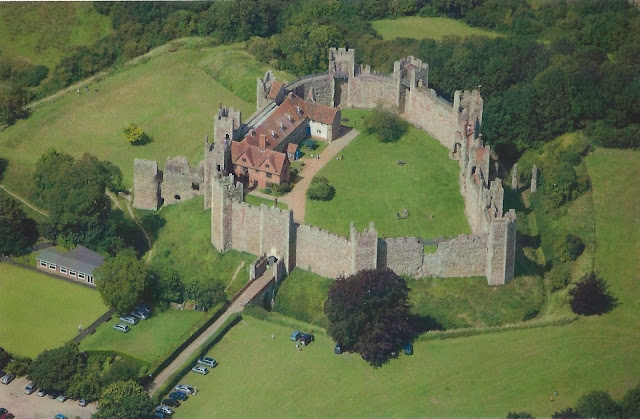 But it was under his successor, Roger Bigod II, that the huge stone curtain walls we see today were built. It was behind those walls that Mary Tudor was proclaimed Queen of England. 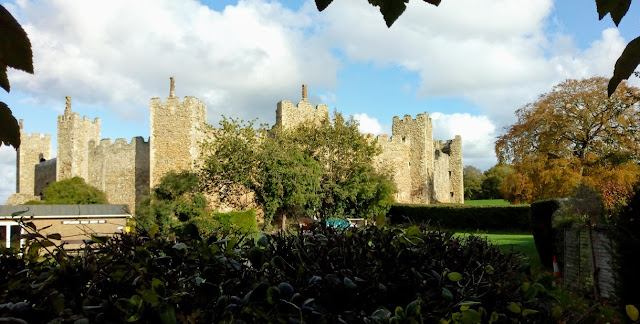 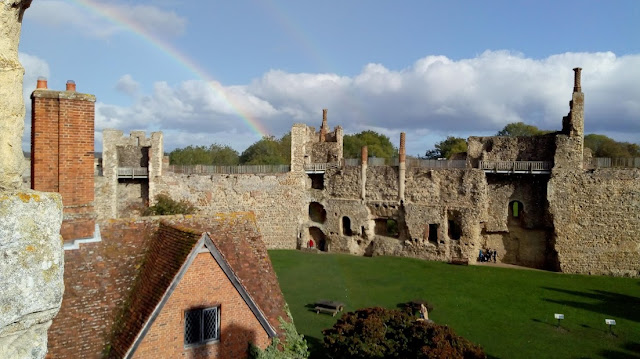 In 1157 Henry II confiscated Framlingham and installed his own mercenaries in an attempt to assert direct control over East Anglia. 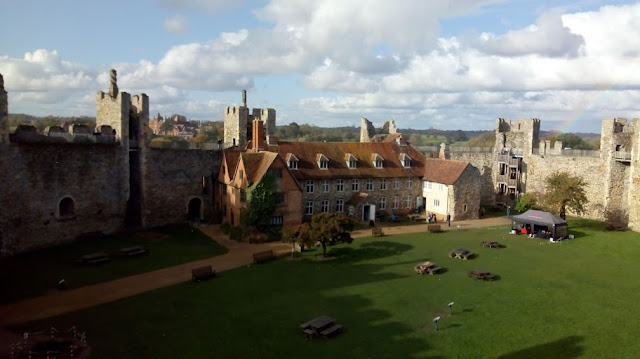 In 1213 the castle was back with the Bigod family. King John was regularly entertained by Roger Bigod II but by 1215 relations had soured - Roger, along with 25 other barons, challenged the high military taxes levied by King John and forced him to accept the Magna Carta. An enraged King John laid siege to Framlingham. After two days, the castle surrendered. This loss of the castle was only temporary however - it was later restored to the Bigods. 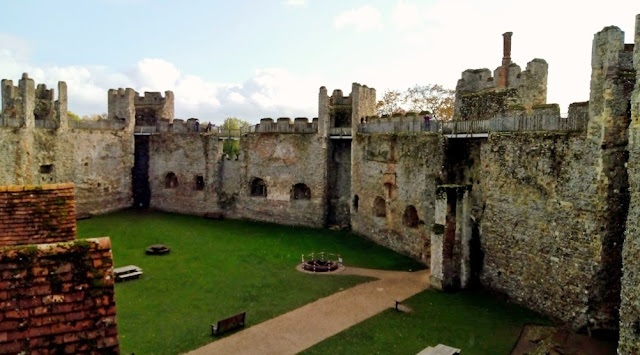 In 1306 the cost of building works and disputes with Edward I bankrupted Roger Bigod forcing him to make the king his heir so once again ownership of Framlingham passed to the monarch.
In the 14th century ownership changed again when Framlingham passed to the Brotherton family. For 17 years it was in the hands of Margaret, the daughter of Thomas Brotherton, 1st Earl of Norfolk. Margaret enjoyed a lavish lifestyle at the castle, she was a powerful woman of the period and the first to be made a duchess in her own right. Following Margaret's death, her grandson and heir Thomas Mowbray inherited Framlingham. It was then passed down to the famous Howard family in 1483. Despite the brief period of the Howards tenure, Framlingham underwent substantial repairs during this time. 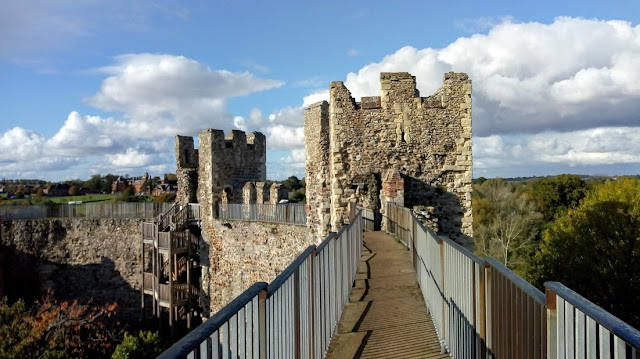 In 1552 Thomas Howard the 3rd Duke of Norfolk fell into disgrace and Framlingham passed into the hands of Mary Tudor, elder daughter of Henry VIII. It was around this time that the castle became the scene of a succession crisis. Although the catholic Princess Mary had been named Edward VI's heir by their father, the young Edward attempted to surrender the throne to the protestant Lady Jane Grey. Pursued by supporters of Lady Jane Grey, Mary fled to Framlingham to gather her troops. It was while she was installed at the castle that she received the news she had been proclaimed queen. One of her first acts as ruler was to restore the estates and dukedom to the Howards. They set about turning it into a comfortable home decorated with the latest interior Tudor fashions. Beds were decorated with crimson silk and velvet bedspreads. A huge tapestry of Hercules greeted visitors in the hall.

In 1635 the castle was sold to rich lawyer and philanthropist, Sir Robert Hitcham. At his death a year later, he left instructions for the castle buildings to be demolished and a poorhouse built. After years of legal wrangling, the first poor families arrived in the mid-17th century and a new poorhouse building was finally erected on the site of the medieval castle's hall in 1729. Just over a hundred years later, the last poorhouse inmates left, and the building was used as a parish hall.
In 1913 the castle was given to the Ministry of Works, and in 1984 it was given to English Heritage. 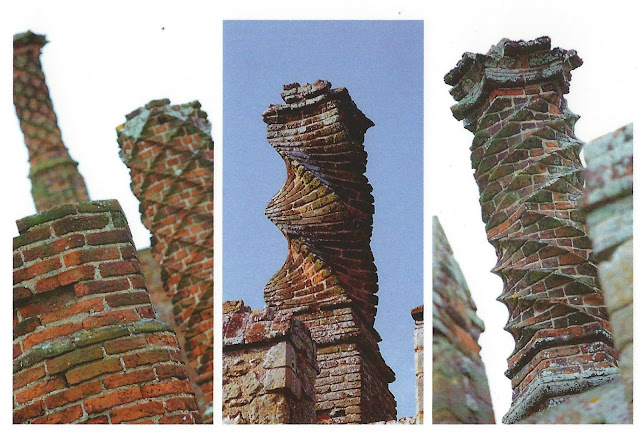 Elaborate chimneys were status symbols. Only three of the castles chimneys worked, the others were just for decoration.

After visiting the castle we had a stroll around. 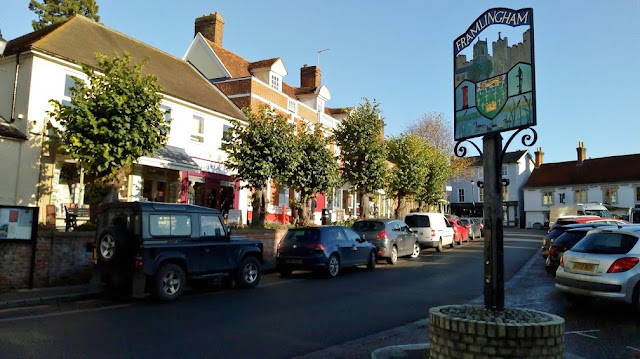 It's a pretty village 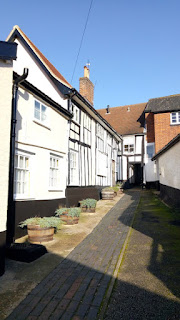 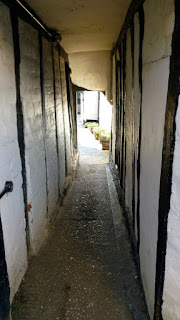 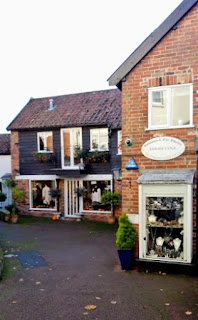 with lots of little alleyways with houses and shops. 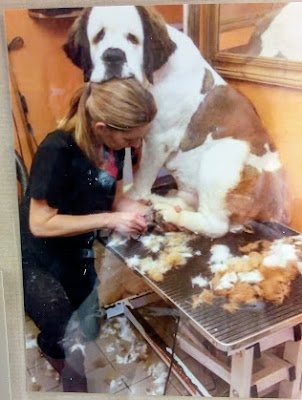 This was a poster advertising a dog grooming parlour.
I think the dog was actually resting on the girl's head!

Email ThisBlogThis!Share to TwitterShare to FacebookShare to Pinterest
Labels: A Nice Day Out, history